There are many external video grabbers that directly digitize analog input to some PC video format. The problem with some of those converters is, that you end up with a video file containing all footage from the tape between the start/stop button click.

Would sound good and easy to use on the first thought... But you will likely never click the recording 'start' and 'stop' button on exactly the right 1/60 or 1/50 of a second.

And you will find old tapes with either

So there is no way to bypass some - even simple - video editing. If you convert with a cheap analog-USB converter you get an already encoded video file that needs to be decoded by a video editing software to get more out of the old tapes... like simple color correction, saturation and/or contrast improvement... and re-coded for the final export again.

A better way is to get a simple but powerful video editing software and a compatible USB-Analog converter, that digitizes directly into the editing software, keeping the highest quality as long as possible. Just one final encoding after the video has been made better, or a nice movie has been made from separate scenes.

The simply solution are found on Amazon: 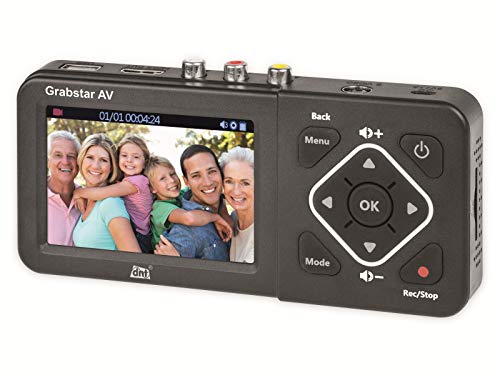 Mit dem Grabstar AV konvertieren Sie komfortabel analoge Video-Aufnahmen von Familienfeiern, Jubiläen, Urlauben und anderen Ereignissen in das digitale MP4-Format. Geeignet für die Aufnahme/Archivierung von nahezu alle analogen Video-Quellen Geeignet... read more
(as of 2020-04-08 - More infoProduct prices and availability are accurate as of the date/time indicated and are subject to change. Any price and availability information displayed on [relevant Amazon Site(s), as applicable] at the time of purchase will apply to the purchase of this product.)

For an improved workflow, we recommend this great combination: